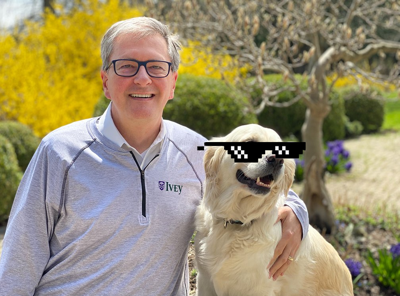 Welcome to the Gazette's annual Spoof Issue! All of these articles are fun and satire, so don't take them seriously. Or do, we can't control you.

Students focus on Shepard's dog instead of the president, survey finds

We begin our show tonight with some breaking news: Alan Shepard, president of Western University, is in fact the person in the video announcements, not the dog.

While this article is a part of our annual Spoof Issue, this editorial very much represents the real opinions of the Gazette's editorial board.

While this article is part of the Spoof Issue, it represents very real opinions from the Gazette's editorial board. We take Spoke bagels very seriously.

Administrators were very disappointed to see students in their pyjamas on Zoom and have become fearful that students behaving like human beings might damage Ivey’s prestigious international reputation.

Campus is a "love free" zone

In an email to students, Western University president Alan Shepard detailed his plans to make campus a “love free” zone, after surveys found an increase in student loneliness due to the pandemic.

It's no secret the pandemic has been hard on students' sex lives. But now, at least they don't have to worry about seeing happy couples on campus.

Western's president Alan Shepard even wrangled the geese himself!

With the incredible response to Western's last mental health message, the university has made plans to send them out on a weekly basis.

Where is Middlesex College anyways?

BREAKING: Sophs just as lost on campus as frosh

Hundreds of frosh and sophs are arriving late to class, with no knowledge of where any building is on campus.

This year's frosh were excited to become sophs and help out incoming students. But after a year online, many had never stepped foot on campus before.

See who takes home the title

Western's eateries duke it out to see who will win the prized Purple Apron.

These geese are not happy

Western’s geese speak out against return to in-person classes

Western University's Canada geese had little impediment to their roaming this year. But, with the university's plan to reopen in September, the geese aren't pleased.

While most students anxiously awaiting their return to campus, Western's geese are worried about what this means for their ability to roam free next fall.

This is a serious matter

Clicking onto the “tests & quizzes” tab on OWL, students nervously await the release of …

Due to COVID-19, snitches no longer get stitches as a result of social distancing regulations, leaving snitches to run rampant and students to live in fear during open-book exams.

Western to become an affiliate college of Huron

In an unexpected turn of events, Western decided they just couldn't live without Huron.

Webkinz was a fun, calming game as a kid, so why wouldn't it also work for adults?

In a shocking turn of events second-year Arts and Humanities student, Isa Frahd, stumbled in…

Wow! A student responded to what everyone thought was a phishing email — you won't believe what happens next!

Hip with the kids

The decision follows after McGhie realized most students simply lack the social capital to enjoy the same outdated tunes every week.

“I hated being dragged to those yeehaw things every week just to listen to a bunch of boomer songs I have literally never heard before," one student tells the Gazette.

Beauty is in the eye of the beholder

"It’s important for us to keep up our reputation of having attractive students,” said president Alan Shepard.

"It’s important for us to keep up our reputation of having nice-looking students,” said president Alan Shepard.

Western University is opening a new residence, the Hasenfratz Family Bunk-House, which is gaining rave reviews from students on campus

The Science sophs struck a deal that will give them a cool new catchphrase and copious amounts of drinkable yogurt.

Wandering in a winter wonderland

Students can now sled on UC hill with the new renovations made by the university.

Grab your snowboots and $500 kids, it's time to hit the slopes.

“I only heard ‘Mr. Brightside’ once that night. It kind of threw me off my game,” says returning grad after a night out filled with TikTok dances.

Brush up on your TikTok dances or honestly, don't bother going to the club post-pandemic.

Western cracks down on geese not social distancing

"Get out your chequebooks, because we're coming for you," the Mayor warned campus geese.

Your honour, I rest my case

Letter to the Editor: In defence of Linda Hasenfratz

In an era of economic and social uncertainty, the comments I’ve seen levelled against me — I…

Geography student Hinda Lasenfratz on why chancellor Linda Hasenfratz had the right idea all along.

A student developed strange symptoms, such as uncontrollable rage, honk-like coughing, as well as frequent bouts of small green-coloured feces after he was bitten by a goose on campus.

Goose enrolls at Western, turns out to be nice guy

Geese Feathers enrols into Western's wildlife program, helps other students and turns out to be nice guy.

To most students' surprise, Goose Feathers is actually a pretty swell guy.