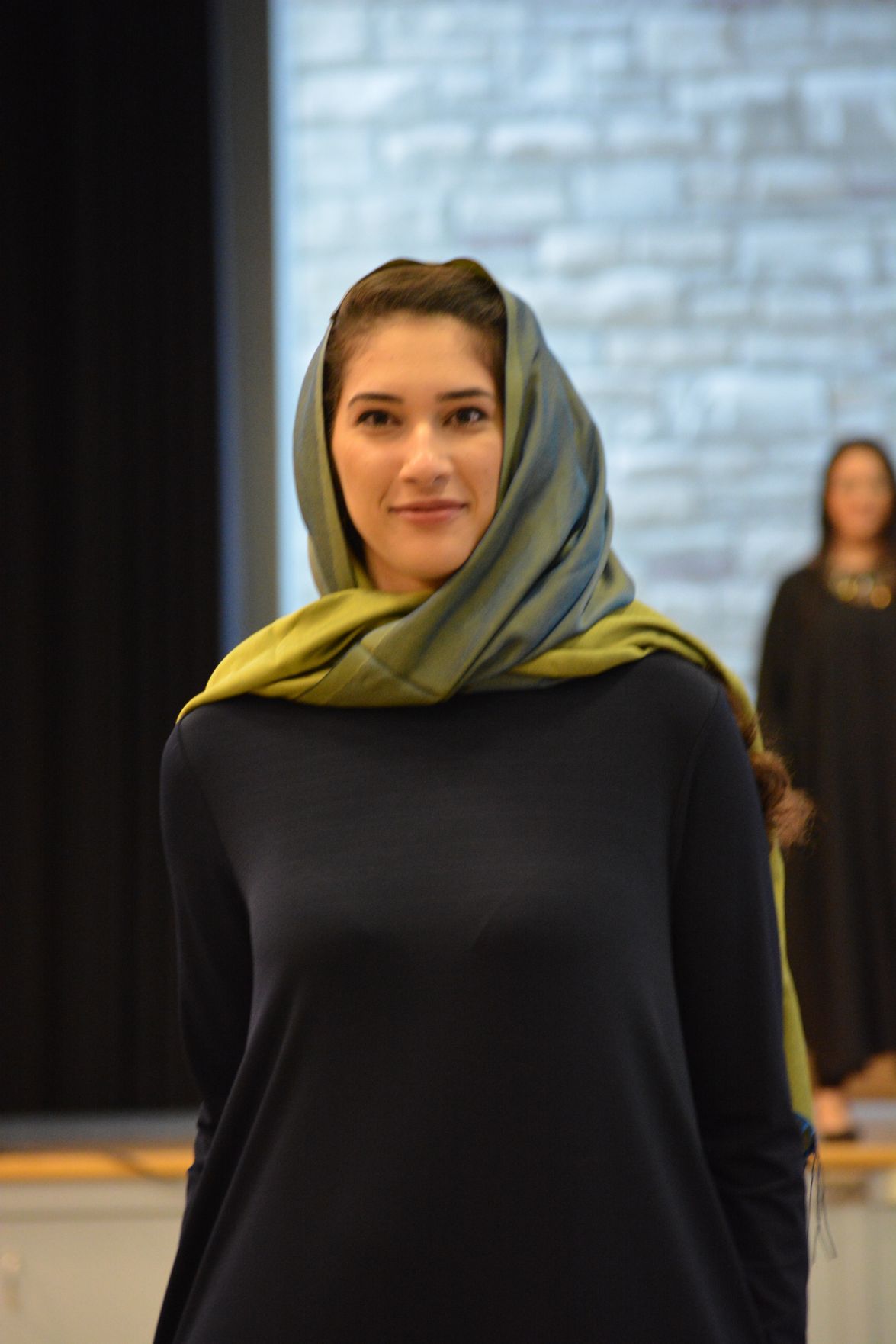 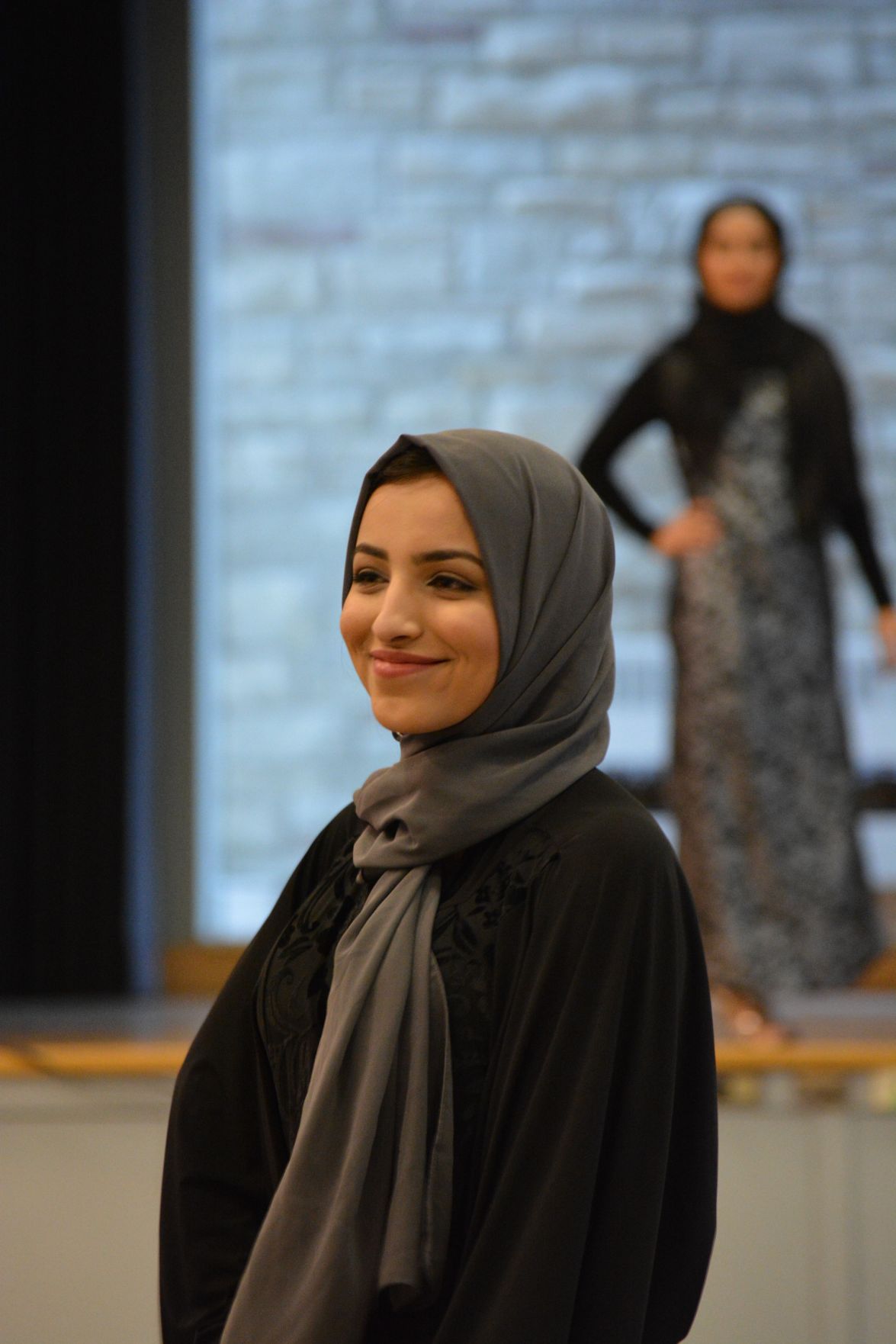 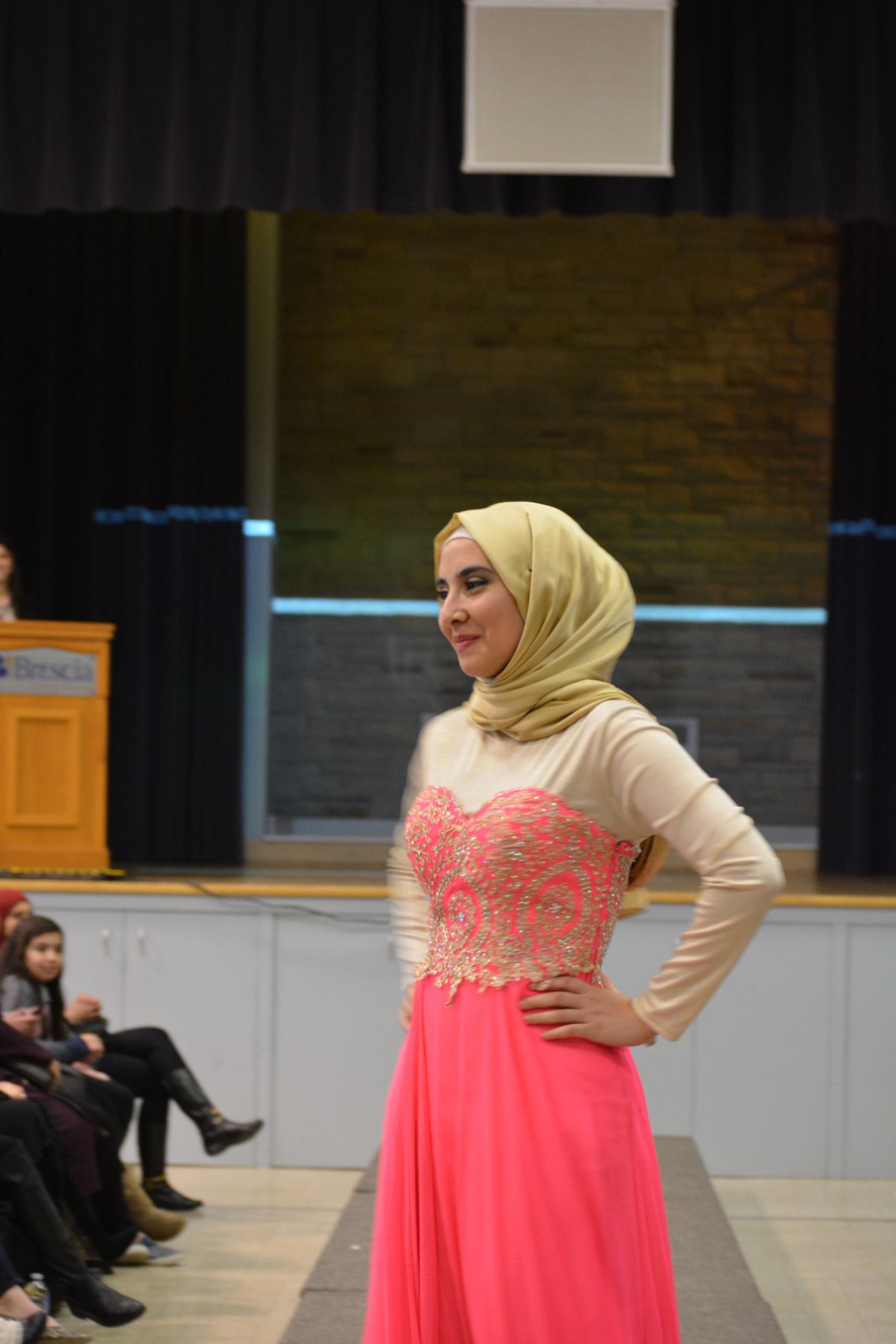 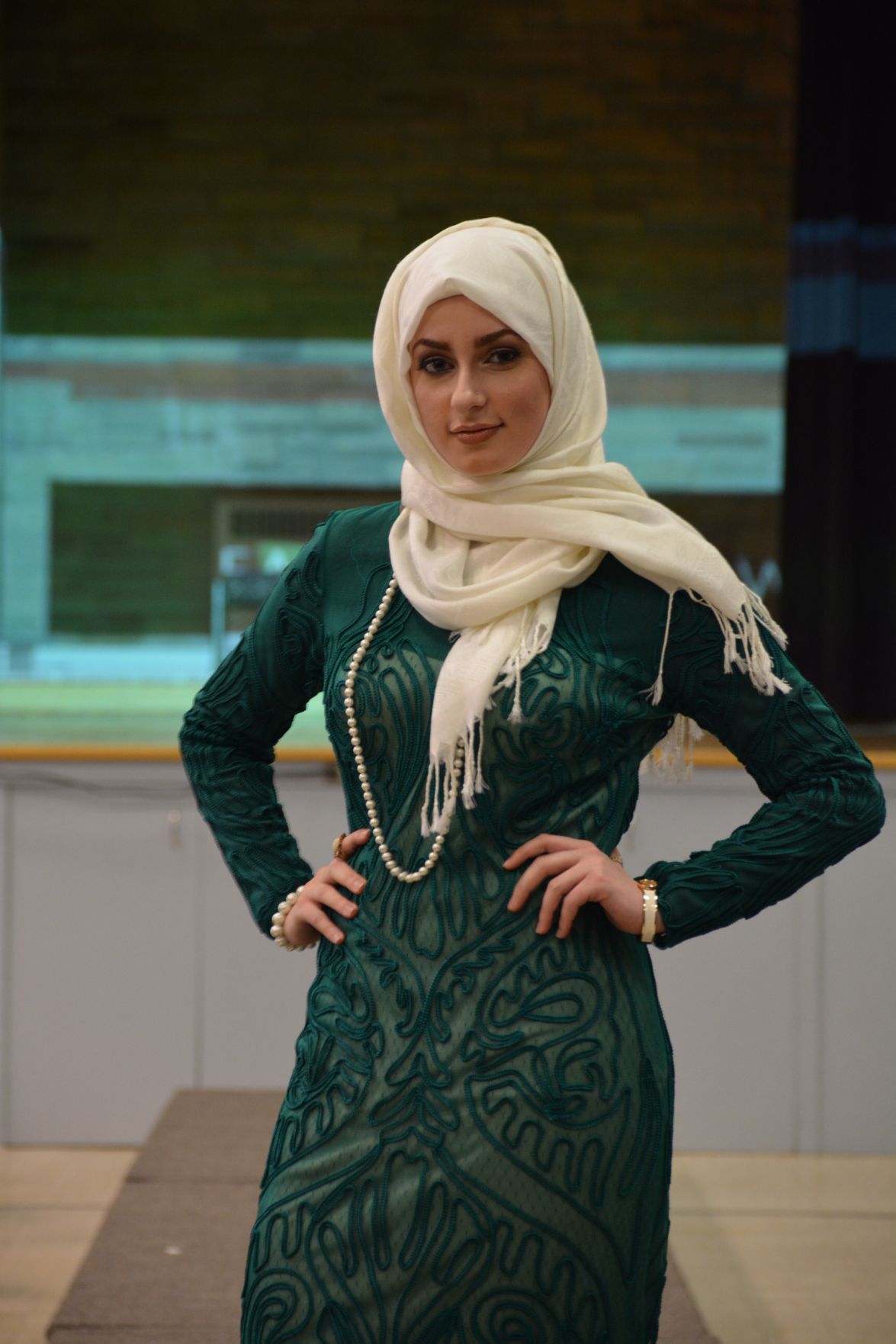 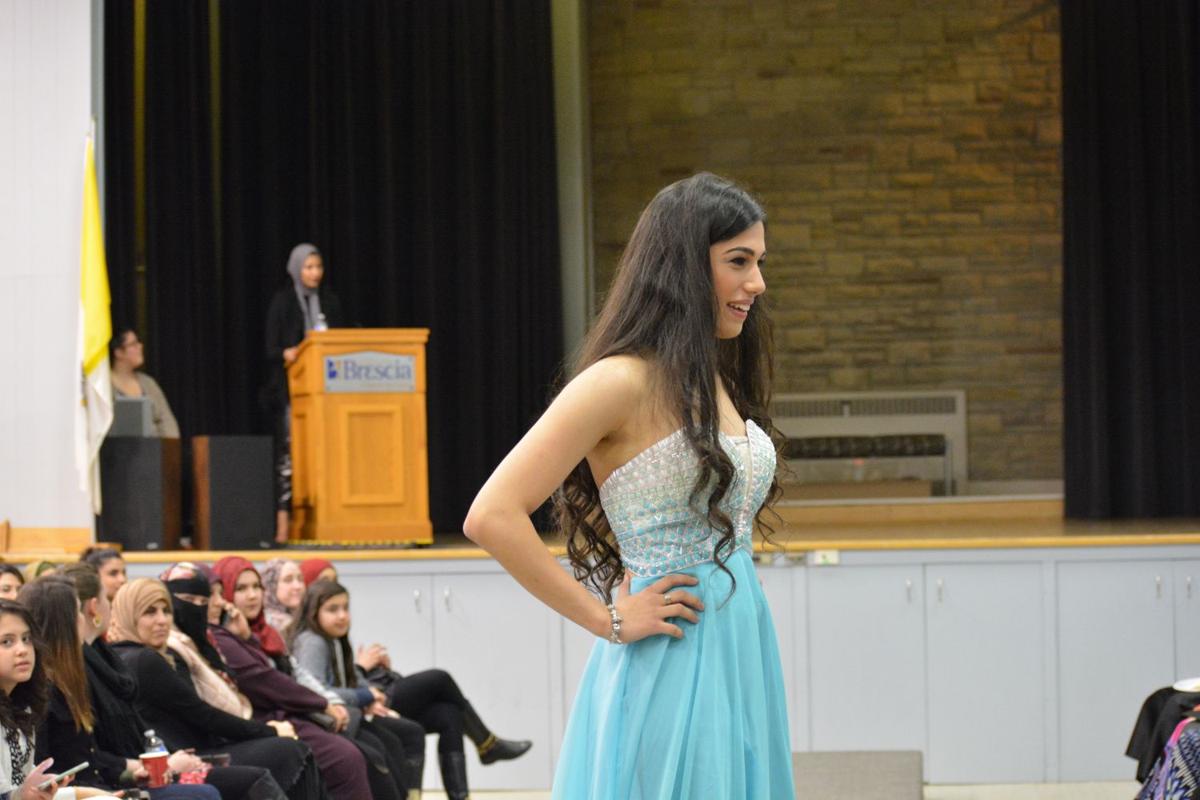 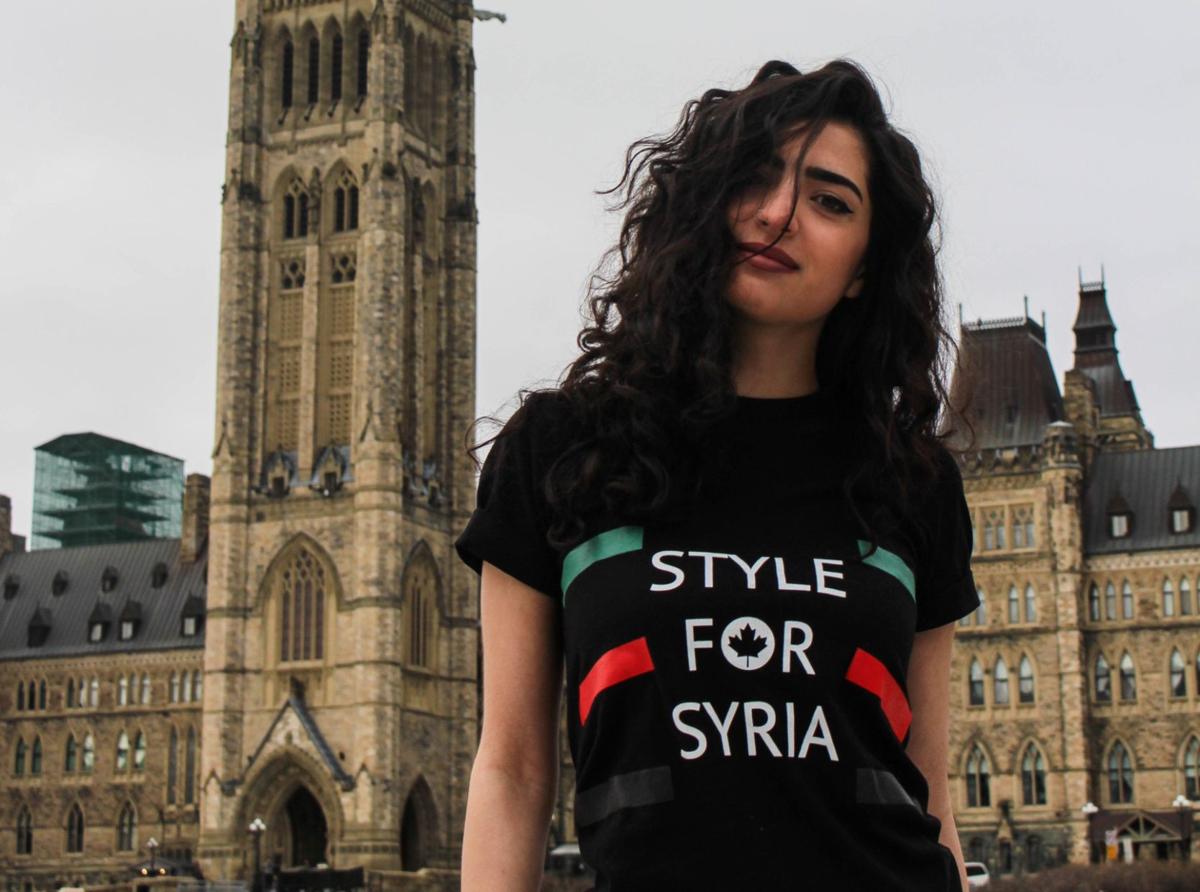 Sunday. It’s a sleepy type of day in the week where students are prone to relaxing rather than brewing their morning coffee, let alone trekking all the way to campus.

However, the organizers of Fashion Show for Syria scurried about Brescia’s St. James auditorium in a caffeinated buzz of preparation far before the local deers awoke to graze.

As the hour neared noon, the preparation for the show hit overdrive. Aided by the brisk pace of ticking clocks, the organizers hit their stride to prepare a meaningful fundraiser. This fashion show stands out from the rest as it showcases a myriad of versatile Muslim attire and exclusively Muslim models.

The models sat diligently awaiting the artists who splayed out their precious palettes.

The sponsors adorned their tables with their labours while volunteers circumnavigated the gym, patterning out the seating and plastering the walls with logos.

Soon enough the red carpet rolled out and photographers carefully assembled their equipment, flooding the area with an airy abundance of perfect lighting.

While all the VIPs and participants fell into synchronicity, one of the event’s organizers splurged on the art of being particular.

Maram Al Bakri, vice-president of the MSA's Sisters,­­­ was constantly checking on virtually every aspect of the event from tech to dresses.

She calmly picked up on what would be the average person’s indiscernible detail with a sort of promptness that only comes with an expert handle on pressure.

Al Bakri and her team aren’t motivated by the pressure to uphold reputation and impress but rather the mandate of the event.

Fashion Show for Syria was intended to benefit the well-being of others, specifically, the displaced peoples of Syria.

The Syrian civil war has been going on for over five years, displacing hundreds of thousands of families and individuals. Most of these individuals are forced out of their native country and have to make perilous journeys in hope of surviving for a better future.

Canada has done its part to resolve the ongoing crisis, having accepted 25,000 refugees so far.

However, these students recognize that the refugee crisis is far from over and help is still needed.

“I hope that the London Community continues to excel at accepting people who aren’t Canadian and who are less fortunate,” Al Bakri said. “I think that [it was important] to give back to the community and entertain as well”.

Brescia University/College Ministry members and event sponsors Janice Lam and Tesa Rosamond explained their involvement in the show as well.

“We really wanted to help support the Syrian refugees and this event came to our attention so we decided to partner up with [Western MSA],” Lam said. “We were able to help by providing space and volunteers."

Soon the MC’s, Sofia Hamza and Tasneem El Koriny, called the show to order and quickly had the audience chuckling at their well placed cheesy jokes.

The moment the crowd had been waiting for arrived and a roaring applause sprinkled with whistling and ululations.

The models began their pilgrimage journeying to and fro, easing into their strides that were accompanied by loving encouragement and a soundtrack peppered with the drums of the Muslim world.

The looks included five distinct lines from each of the sponsors.

Haya and Scarfina lines were contemporary and comfortable dominated by colour scheme of busy patterns and shimmering solids.

The last line of clothing came from Style for Syria, a non profit organization whose cause is supports the main goal of the show: fundraising for Syrian refugees. It was a more modern line mostly composed of crew tees and sweaters striped in a Hudson’s Bay-esque manner.

The sweaters fused the colours of Syria with a lovely Canadian maple leaf printed upon it’s waist and as the oohs and ahs echoed through the auditorium, eventually the show comes to an fan fare filled end.

“It was a lot more successful than I even anticipated," said Zain Al Zeiq, model co-ordinator. "There were so many people. I was so impressed and everything went by so quickly and so smoothly.

“I think we made a mark on the whole issue and left an impact. Ending the show with Style for Syria really left an impact on why were doing this; to raise awareness and raise funds for Syrian refugees," she added.

The models made their way to the stage for final bows as they waved the Syrian flag high and the MCs remind all the participants of the difference that they’ve made in the lives of ordinary people thrown into extraordinary circumstances.

Following Proctortrack's recent data breach, professors give their reasoning for using the software and potentially continuing use.

Can you date someone you disagree with politically?

Political discussion doesn't have to always lead to conflict.