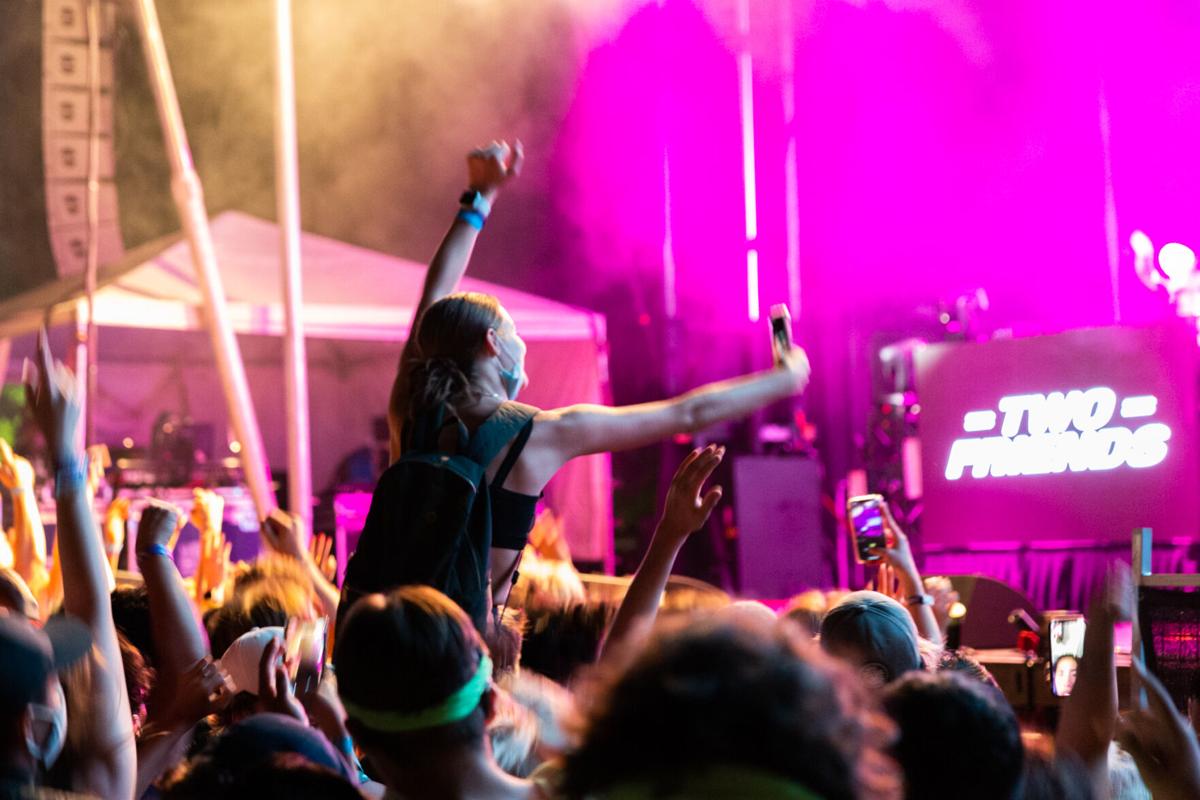 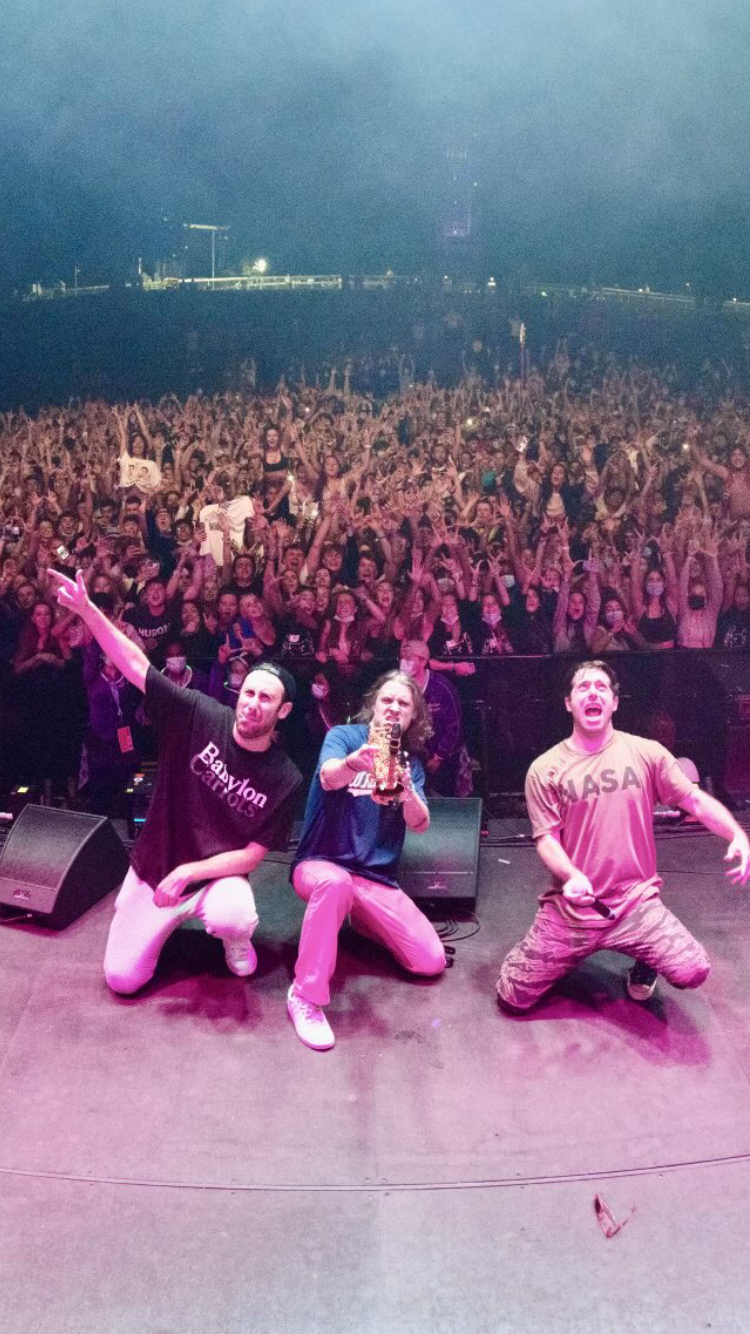 Monday night’s OWeek opening ceremonies drew large crowds of students and saw them unsure of where to go and when to follow the rules.

The night began with crowds of frosh waiting to be welcomed into a new chapter, but quickly saw some groups of students unmasked and largely dismissive of social distancing rules — both during the ceremony and around campus.

Frosh were seated on both UC Hill and the Health Science field with their residences — an attempt to socially distance the 8,000 first-year students in attendance.

The majority of frosh were set to watch the welcome performance on live-video streams from their seats. Only students in Delaware Hall and Elgin Hall had spots close to the main stage, allowing them to view the event live.

Despite Western University and the provincial government's elimination of social distancing on campus, the University Students’ Council — who organized OWeek — attempted to enforce physical distancing during the opening ceremonies.

Sophs remained on lookout throughout the night, asking students to remain six feet apart and keep their masks on, making it clear students who broke the rules would be kicked out. Sophs also guarded gaps in the fenced area where students repeatedly tried — with some successes — to break into the live event.

OWeek organizers said Two Friends will perform shortly. Frosh who were supposed to be watching a livestream from the Health Sci fields are breaking into the fenced venue where the duo will perform live as sophs try to manage the seemingly restless crowds. pic.twitter.com/nJx6mMaCXp

Despite these efforts, USC president Zamir Fakirani paused the event three times throughout the night to remind students to remain seated, masked and socially distanced.

The rowdiness began after the live-stream on the Health Science field shut down briefly, prompting students who were already disappointed by their viewing experience to exit in large groups towards UC Hill where the main stage was located.

“It’s university right? It’s my first time. I wanted to experience that grand opening ceremony type of feeling, but just having a screen in front of you — it’s different from what I imagined to say the least,” said Otis, a first-year computer science student who remained behind at the Health Science field. “I completely understand everyone who wanted to go over there.”

Students lingered at the top of the hill, growing restless as they were unable to find an entrance into the fenced area. Inside the fence, “mosh pits” formed as USC executives tried to placate the students.

Away from the main stage, frosh are forming a mosh pit as Two Friends are live streamed on a video screen pic.twitter.com/Q6jtt6EEMh

“Everyone [started] trampling each other and everybody started yelling at each other,” said Jacky, a first-year engineering student. “They stopped the program because everybody wasn’t cooperating.”

Socially distanced frosh were few and far between as thousands tried to fit into the tight spaces on the hill — the crowding got worse as the first-years clumped near the main stage to to experience the ceremony live.

In an attempt to settle the commotion, Fakirani successfully made a “deal” with the crowd — if students sat down, put on their masks, social distanced and “stop moshing,” he promised to move up the much-awaited Two Friends performance ahead of schedule, which in turn cancelled the opening cheers of the faculty and charity soph teams.

“The London noise bylaw required that we end our mainstage programming at 11 p.m.,” the USC said in a statement. “In order to maintain our contract and commitment with Two Friends, we needed to ensure our ceremonies concluded by 9:30 p.m.. With the unexpected delays we incurred, we had to move the cheers to our closing ceremonies.”

And, while the first-year students were momentarily placated, the calm did not last long — those lingering on the hill broke into the fenced area around the main stage as Two Friends began their performance.

“There was a concert and people didn’t know how to get in so they just jumped the fence, said Anastasis , a first-year computer science student. “Everyone wants to see it live so they just went over there by force.”

While the highly-anticipated Two Friends performance was in full swing, first-year students inside the fence grew more dismissive of safety measures and began crowding around the stage, with some removing their masks.

The USC is currently in talks with campus leaders on possible changes for closing ceremonies and the rest of OWeek. In a statement USC executives confirmed moving the rest of OWeek online is “on the table.”

“We are currently working with Western, OStaff, and our head sophs at the moment to determine if our plans need to change,” the USC wrote. “We know students are looking forward to the rest of the programming and we want to make it as accessible, safe and fun as possible.”

In a media briefing Tuesday, Dr. Chris Mackie, chief medical officer of health with the Middlesex-London Health Unit, said he is concerned about the coronavirus consequences of opening ceremonies and the Orientation Week to follow

According to Dr. Chris Mackie, London may see its COVID-19 case numbers rise as students prepare for a semester of in-person learning.

“​​We know with some certainty that that sort of activity will cause an increase in our numbers. … I think young people know the right thing to do,” Dr. Mackie said. “I just hope they're vaccinated and being as careful as they can.”

The night ended with agitated students who were forced to settle for a video performance dispersing across campus, while those inside the fenced area around the main stage stayed to enjoy the night’s end.