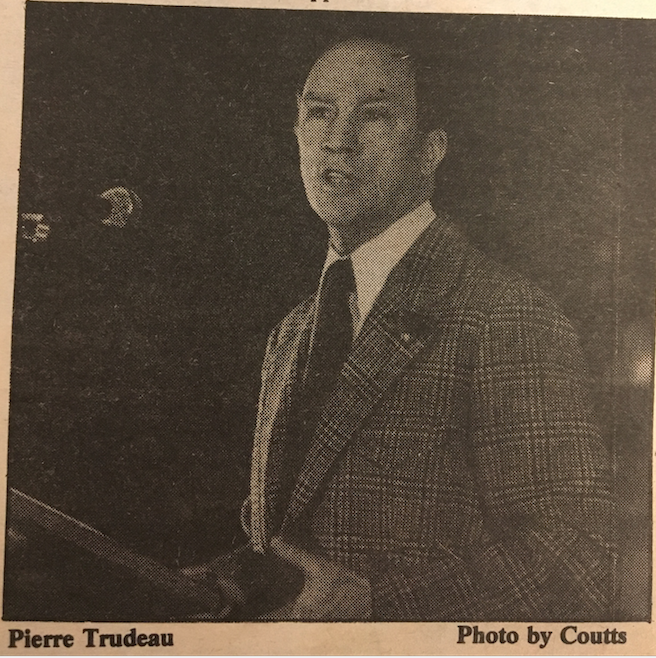 Pierre Trudeau speaks at a campaign event at Alumni Hall in 1980. 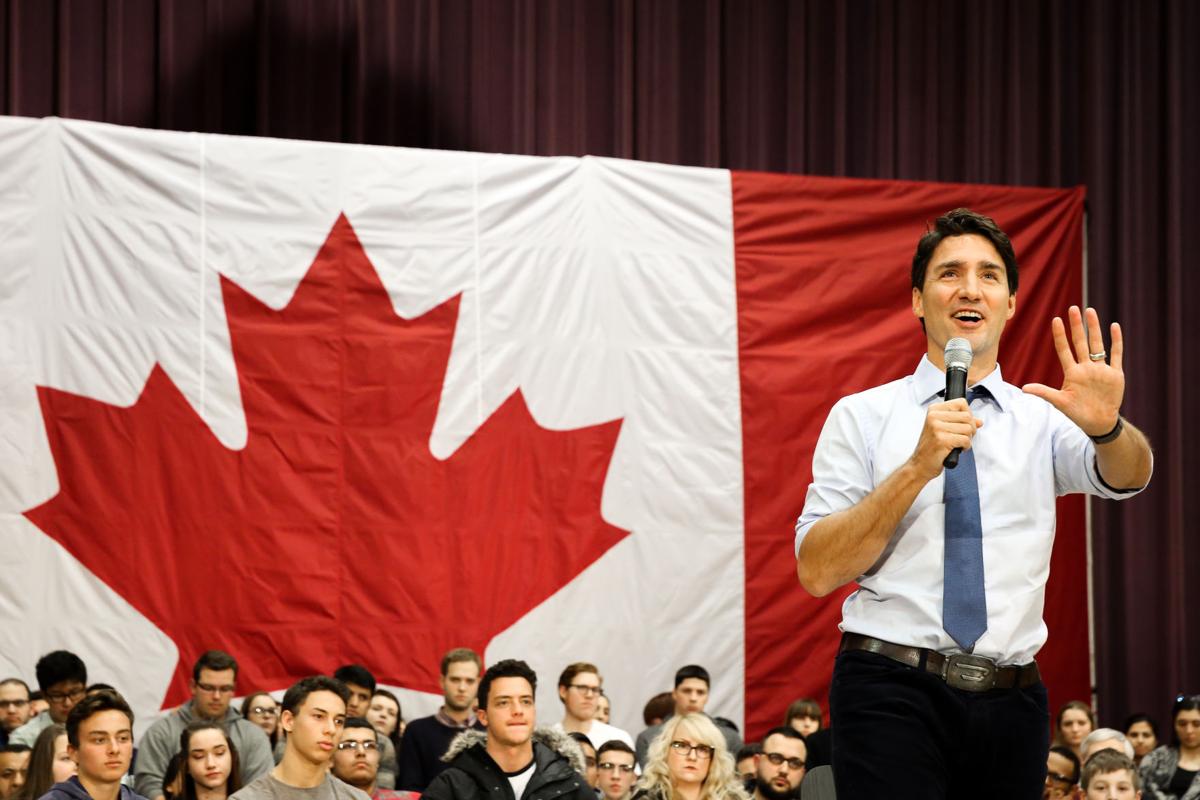 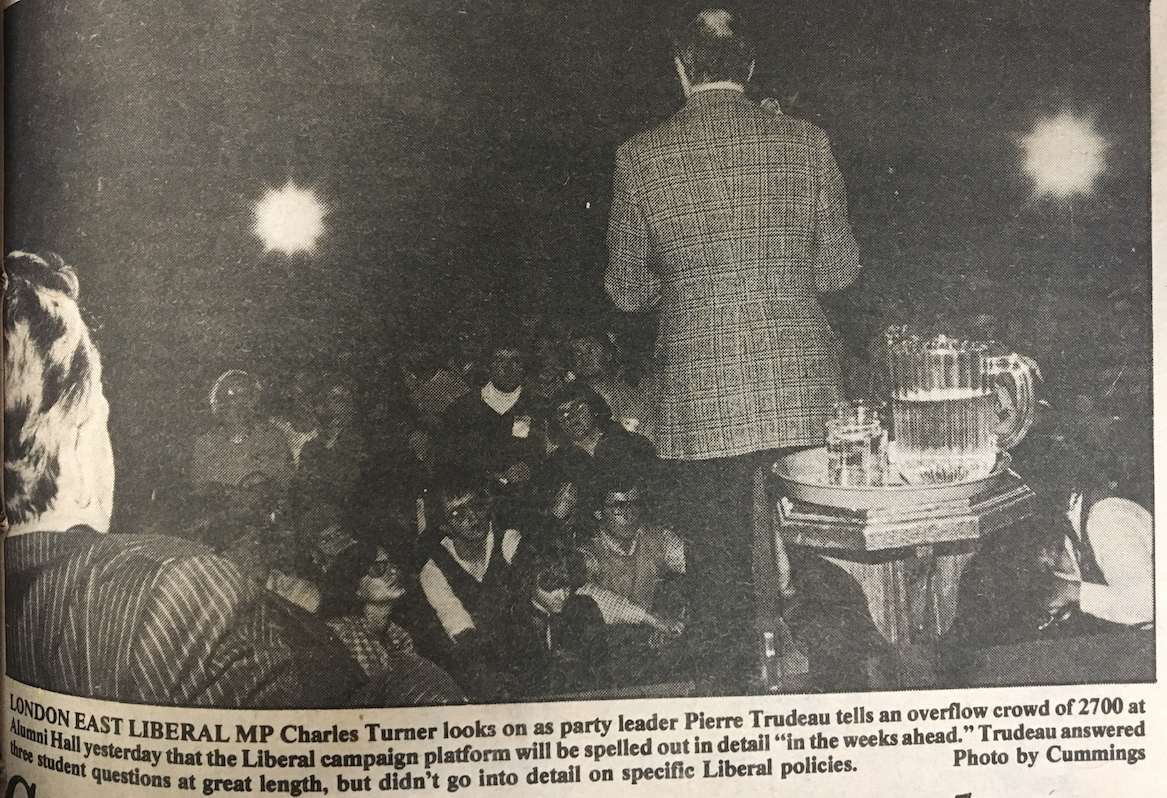 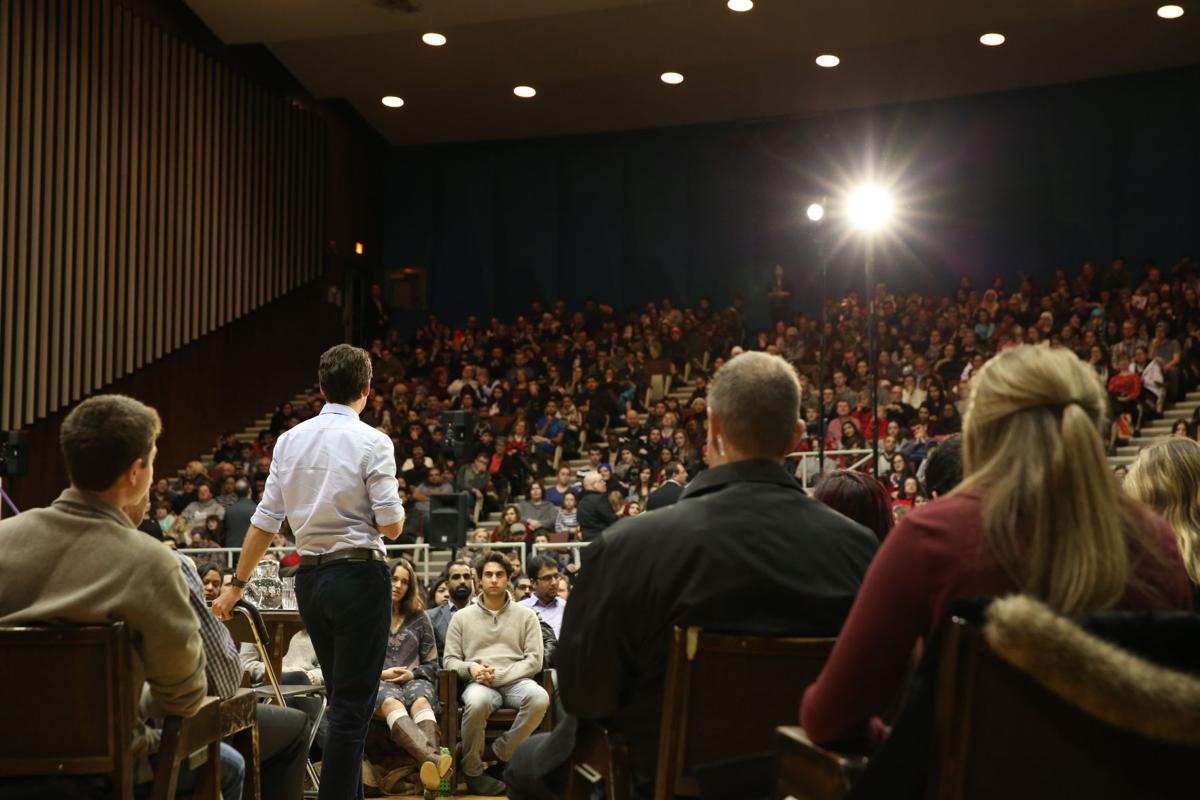 Pierre Trudeau speaks at a campaign event at Alumni Hall in 1980.

When Prime Minister Pierre Trudeau visited Alumni Hall on Jan. 14, 1980, 1,000 people were locked out of the building. Almost 27 years later to the date, when his son PM Justin Trudeau visited the very same campus building, almost 1,500 were turned away from the venue.

In 1980, the former PM visited Western's campus to deliver a platform speech while on the campaign trail and Alumni Hall was filled to capacity with 2,700 people attending. An audience of such size would be repeated three decades later when, on Jan. 13, Alumni Hall was packed with more than 2,000 people in one of the biggest town halls held by the current PM. (Fire code regulations prevented organizers from filling in any more people.)

Although separated by a generation, the father-son duo proved to be nothing short of each other’s charming charisma.

“He kissed me, and it was damn good,” a woman said about PM Pierre Trudeau in an interview with The Gazette in 1980.

“He’s very intelligent. He turns me on,” added another woman.

According to advertisements from The Gazette’s 1980 issue, Pierre Trudeau’s visit was an expected event for the London community; a planned speech from the former Prime Minister during his 1980 campaign period.

Liberal workers were originally reluctant to let Pierre answer questions from the audience because of time restrictions, but eventually allowed it, even though the Prime Minister was evasive at times.

“We were rather disturbed that Pierre was coming on campus and he was going to go unchallenged,” said an event attendee from 1980.

In contrast, Justin Trudeau’s town hall, despite the warm reception, saw the PM challenged by a series of tough questions.

PM Pierre Trudeau’s speech had a central focus on economic growth and opportunity for Canadians, while lambasting Tory policies on the side.

“We will not introduce the gas tax,” said PM Pierre Trudeau. “We will have a ‘Made in Canada’ price mathematically based to ensure Canada will continue to explore and develop, but not one based on OPEC or world prices.”

He would later mention that he aimed to reduce the country’s deficit and increase economic activity without costing jobs in collateral. He emphasized that Canadians were looking for a government to provide stability.

“All the Tory promises went out the window on budget night,” he said.

On the economy, while the older Trudeau rallied against the "gas tax," the current PM is supportive of the federal carbon tax. Pierre Trudeau's quote from the event saying the gas tax would affect "those who are hardest hit already" will probably resonate with many current Conservative opponents of the carbon tax.

When asked about Canada’s $1.5 trillion debt projection and the government's deficit spending, Justin Trudeau responded by saying that the Liberal Party is investing in the middle class and he stands by the government’s fiscal direction.

That was pretty much the same thing his dad said in 1980.

"Our pledge is to hold the line on government expenditure growth. The deficit is still higher than many countries in proportion to the GNP. We will reduce it but not at the expense of job," Pierre Trudeau told the crowd at Alumni Hall.

Despite the eerie similarities and differences in what the two popular Prime Ministers actually said, it is safe to say the Trudeaumania of the 1980s never really left Western.

Hill Du is a news editor for volume 111 at the Gazette. You can contact him with any questions or concerns at hill.du@westerngazette.ca