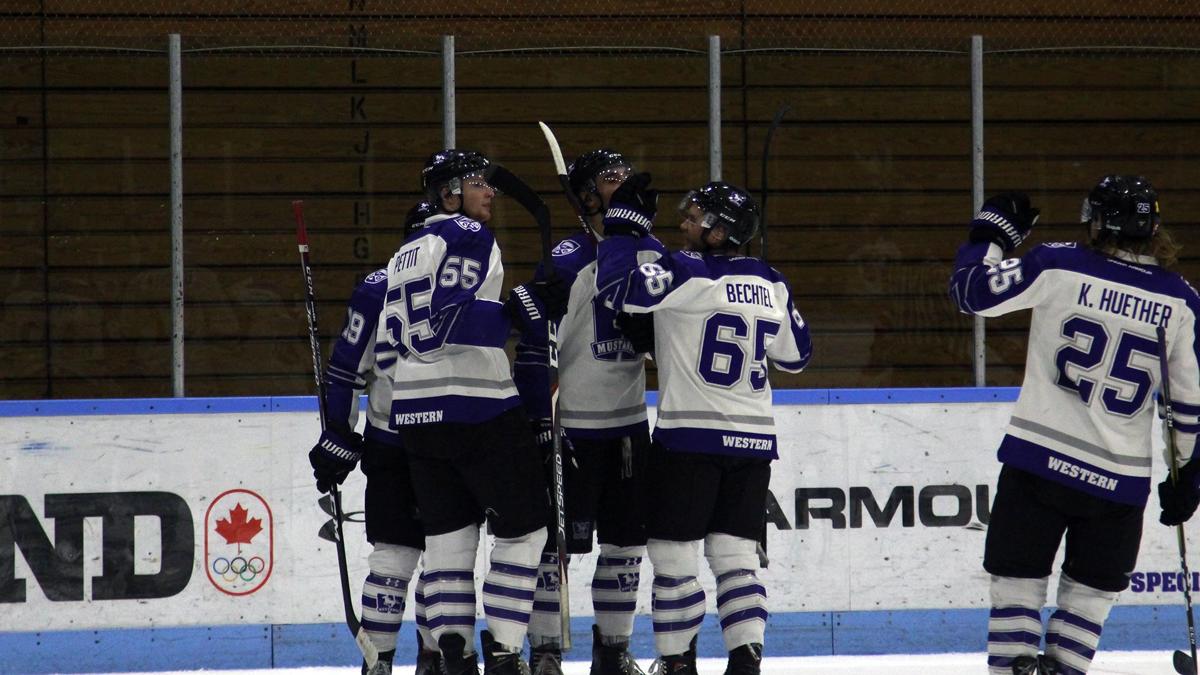 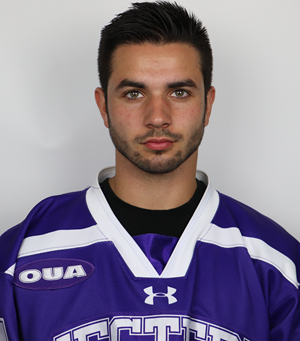 The first-year student athlete played his first game for the Mustangs this weekend and notched a game-tying goal for the first tuck of his U Sports career.

Add the second-period marker, some solid defensive play and a massive open-ice hit together and it makes for a pretty impressive debut for the Lambeth, Ont. native.

After the game, Moniz was pleased with his first game and the support he received from the veterans.

"Yeah, you know, I really enjoyed it. Had a lot of fun,” said Moniz, when asked about his first career game. “You know, the guys, they were really good with me. Like pulling me up before the game and keep my confidence up. We had a good night overall and I'm happy we got our first win at home this year.”

Unfortunately for Moniz, he came in under a fair amount of pressure. Coming off a blowout loss, the team was challenged to play much harder than they had the night before.

With the pressure the entire team felt to get a win and the nerves of a first career game, the rookie could have easily gotten ahead of himself; he could have pushed too hard and made mistakes.

Anticipating these nerves, the coaching staff gave Moniz clear instructions before the game.

“Yeah, you know the coaches talked to me before the game. They told me to keep it simple,” explained Moniz. “They told me not to try to be a hero, or anything. Just play within myself and just go from there.”

After Saturday's game, it looks like the advice hit home. Assistant coach Patrick Ouellet noted that he did exactly as they asked.

“Well, he kept it simple, right? He moved the puck, he didn't get beat out of the corners and stuff like that,” said Ouellet. “He just played solid defence and ended up with a goal, which we'll take gladly. The biggest thing in his game is to play defence and defend well and be a good force for us out there.”

Clearly, he didn’t try to be a hero. However, as often happens in hockey, while keeping his game simple, he became a hero.

Moniz’s goal in the second period tied the game at two. It helped shift the tide of the game after Western dominated play but couldn’t find the back of the net.

The goal didn’t go to his head, though. He continued to play sound defensive hockey.

In the third period, with the Mustangs up by one goal, the young defenceman’s positioning at the side of the net broke up a would-be pass to the front of the net. York could have easily tied the game with one well-placed shot, but the rookie stopped the chance.

The first-year player was an integral piece of Saturday night’s victory. He was easily one of the three stars of the game. And his game, as a whole, left a good impression on at least one of the veteran leaders in the locker room.

“Mony is there on defence, a rookie for us. Really happy to see him step in, he got a goal, he made some big hits, he was solid for us defensively,” said third-year defenceman Stephen Desrocher. “I thought he had a great game, really proud to see that.”

With his first game and goal under his belt, the rest of the season will be a little bit easier — the monkey is officially off his back.

However, that doesn’t mean he has adjusted to the league yet.

After splitting time between the North American Hockey League and the Greater Ontario Junior Hockey League over the past two years, one thing stood out in his first game at the university level.

With more experience in the league, that speed will start to feel normal. And if Moniz can find his place in the line-up, he’ll be a huge addition for a team that lost two of their six starting defenceman before this season.