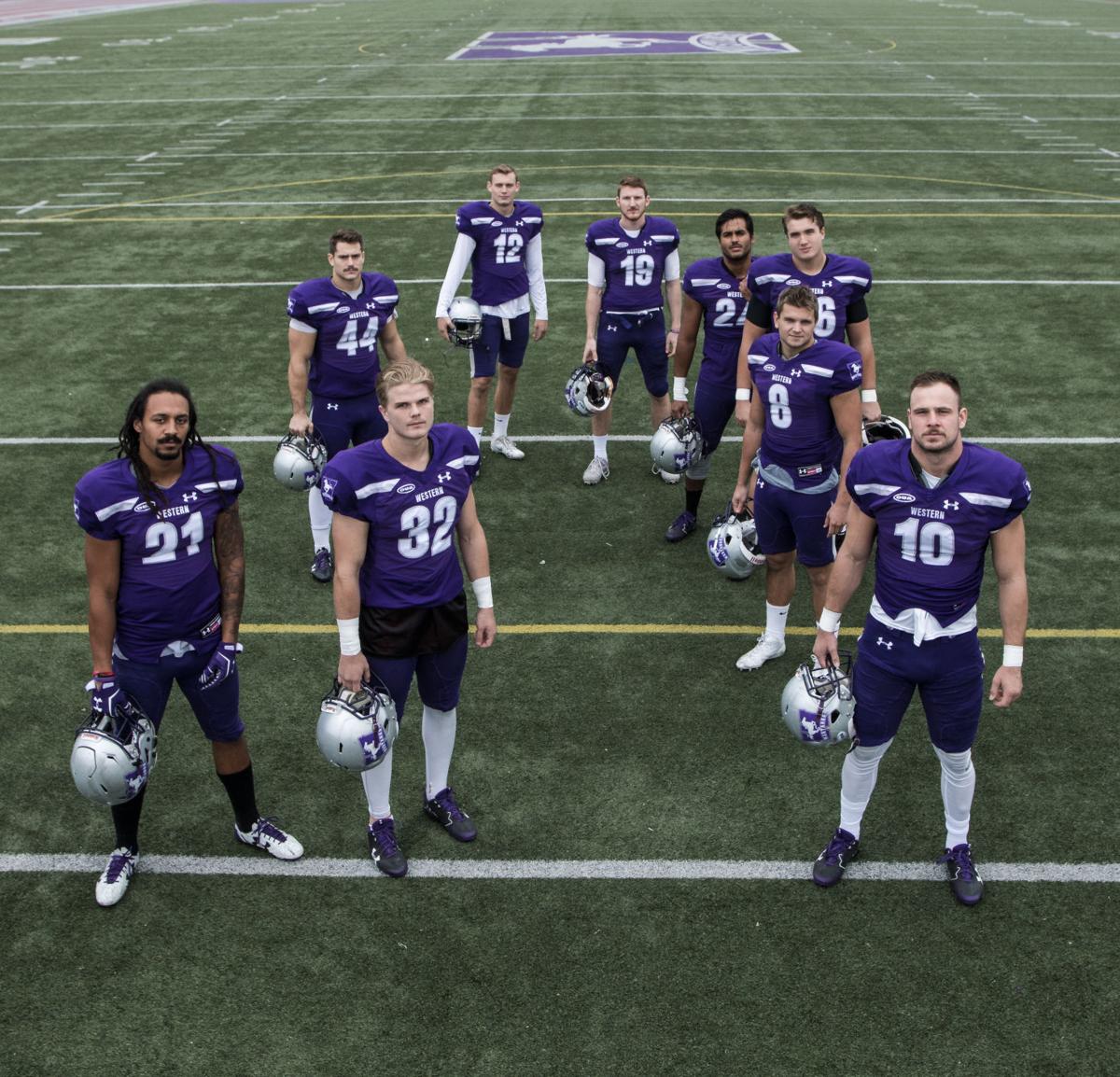 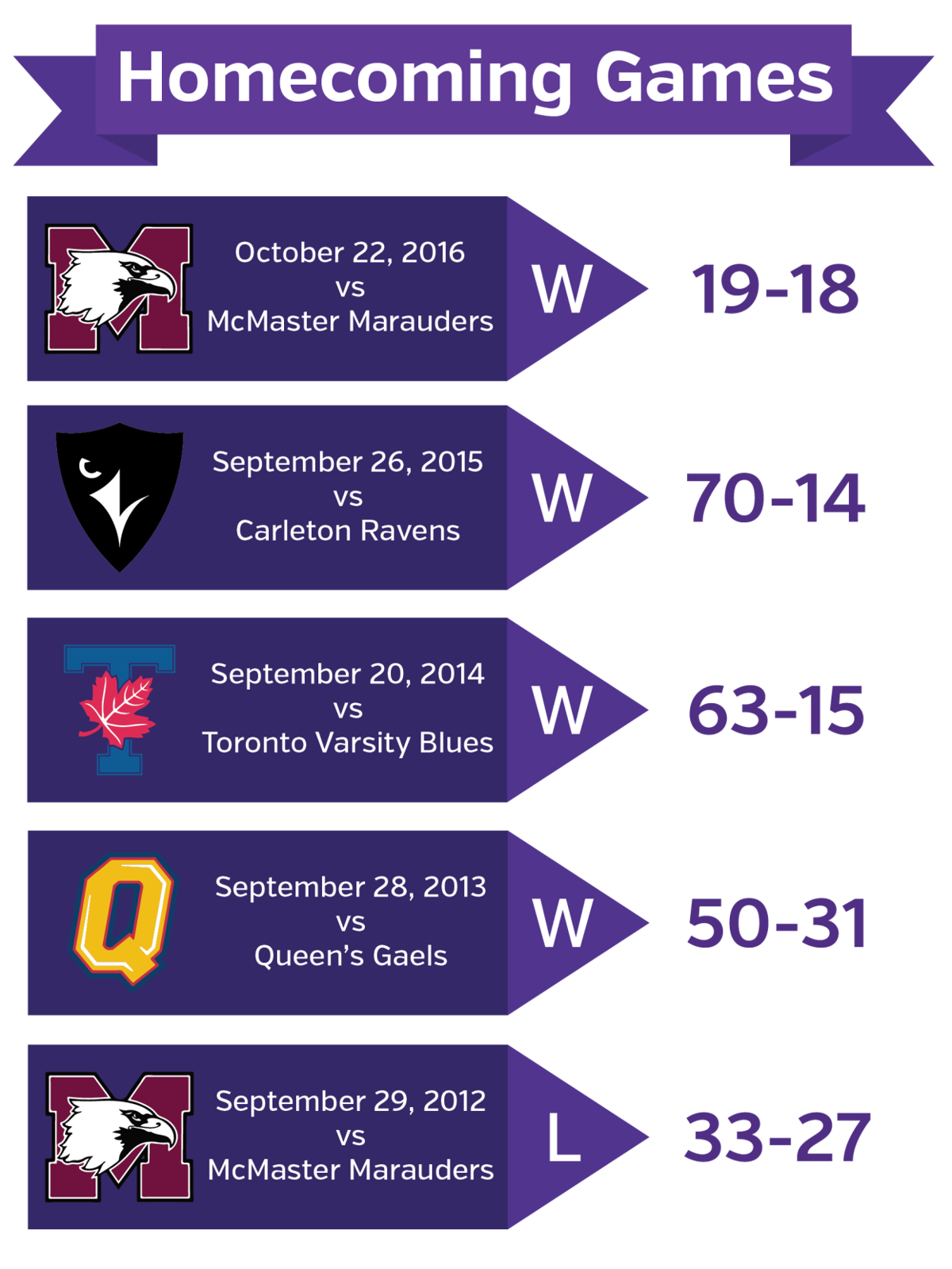 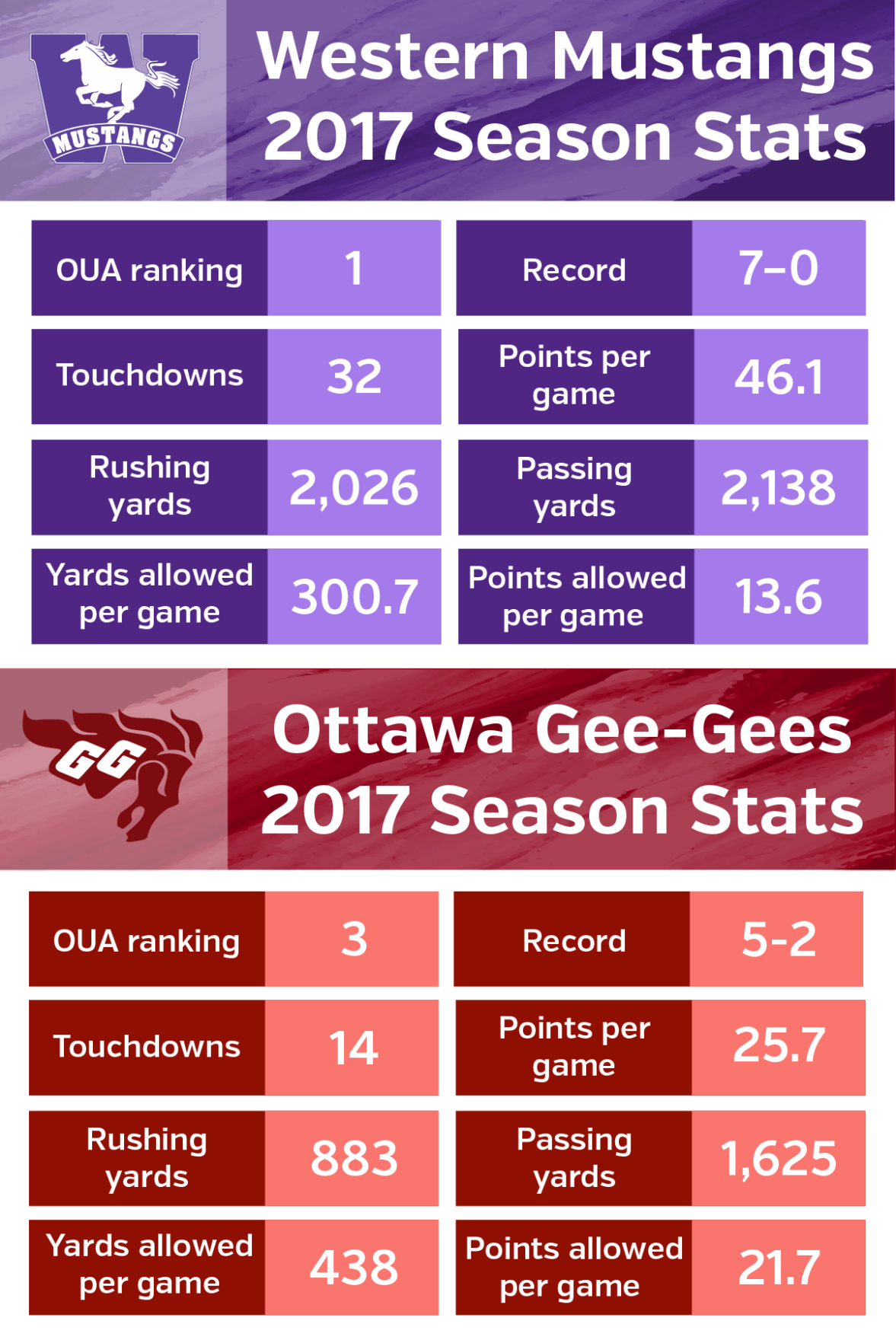 One more game, then, it's playoff time.

The timing for a Western-Ottawa football game couldn't be more perfect. The Western Mustangs sit at the top of Ontario University Athletics with a 7–0 record. The Ottawa Gee-Gees are currently third at 5–2.

This game could be a preview for the OUA semifinals on Nov. 4. If everything goes as planned, though it rarely does, the Mustangs could be meeting the University of Ottawa for a spot in the Yates Cup.

But when the two teams meet on Oct. 21, in front of a Homecoming crowd at TD Stadium, the game will have a much different meaning.

This game is a tuneup for the Mustangs. The team has already clinched first place and home field advantage in the OUA playoffs. Aside from the bragging rights associated with a perfect season, there are no real ramifications if they lose.

However, Homecoming will always mean something special. It's a reunion of all those who have made Western football so successful since the Purple and White played their first season in 1929.

“It means tradition to me," said fourth-year linebacker Jean-Gabriel Poulin on the importance of Homecoming. "It means having all the alumni back and family and everybody involved in the program comes to support [the team].”

Even though the Homecoming date changed last year, the Mustangs still expect a big, raucous crowd at TD Stadium when they face off with Ottawa.

As the games are set to become much more important come playoff time, Homecoming offers a respite from the pressures and noise that come with a run at the Yates Cup.

“Homecoming is like a reunion," said third-year running back Cedric Joseph. "Homecoming is just all about having fun. That’s the mentality; that as much as we gotta get out there and hustle and run around, at the end of the day, it’s about having fun with everyone else that’s enjoying the game.”

A number of key Mustangs will be playing in their final Homecoming game. Guys like Poulin, receiver Harry McMaster and running back Alex Taylor have been pivotal in the recent success of Mustangs football.

And since Homecoming also coincides with the final regular season home game for Mustangs in their final years of college eligibility, the day will have special significance for the seniors on the team.

There is a bittersweetness associated with this game. The Mustangs are guaranteed one more home game in the OUA semifinals, and there's a better-than-good chance they also host the Yates Cup.

But for the coaches who have developed the seniors on the team from raw freshmen to seasoned veterans, it's a time of reminiscing. The Mustangs churn out talented players year after year, contending for championships on a regular basis.

For the Mustangs coaches who have dedicated their lives to these young men, there's an emotional aspect to the occasion.

"The unique thing about university football is you see players come in as freshmen and mature over their four or five years here," said Mustangs head coach Greg Marshall. "It’s bittersweet because it’s good that they’re moving on and graduating and [we're] appreciating their accomplishments, but at the same time, you miss them. You coach them and spend a lot of time with them over four or five years."

A big crowd, an emotional atmosphere and a perfect record on the line should make for an exciting day of football. There will be tradition in the air: the tradition of one of the greatest college football programs in the nation.