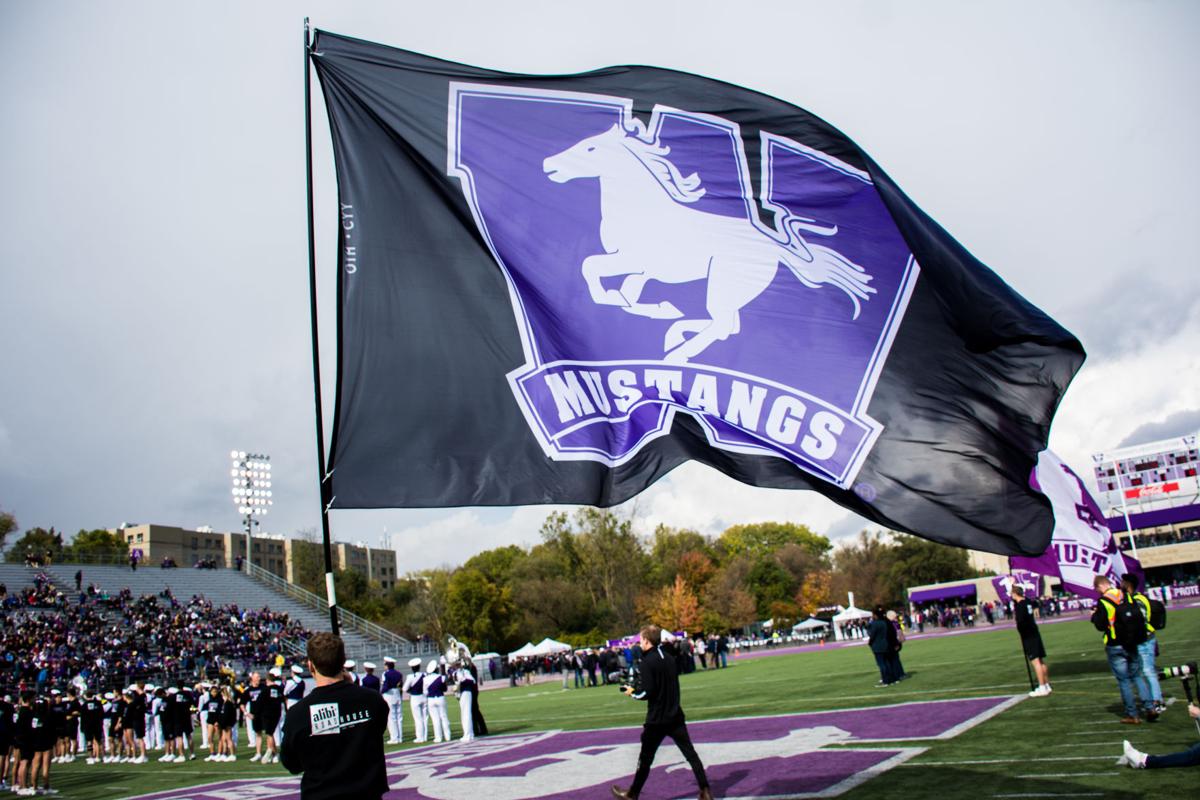 A cheerleader flew the Mustangs flag as the teams prepared for the game, Oct. 20, 2018. 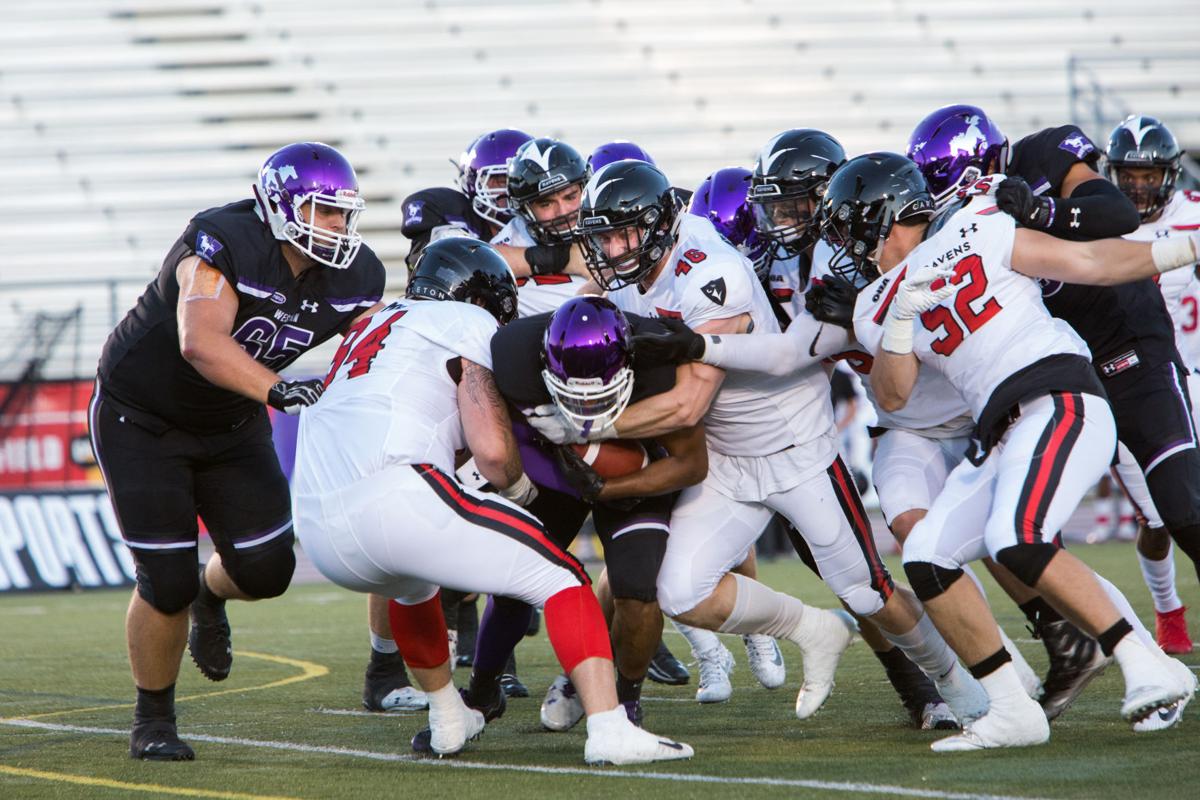 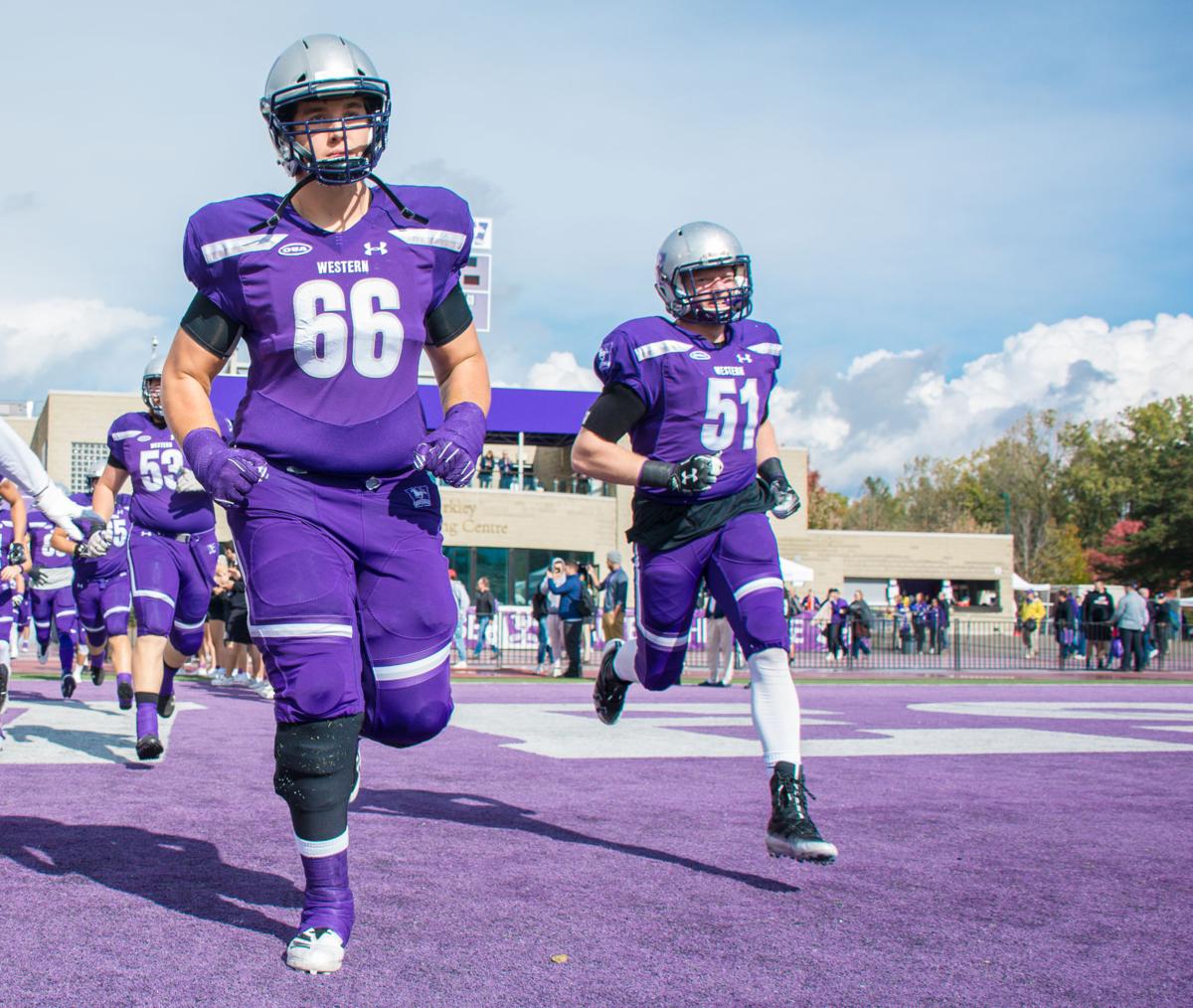 The Mustangs took the field at the Homecoming football game, Oct. 20, 2018. 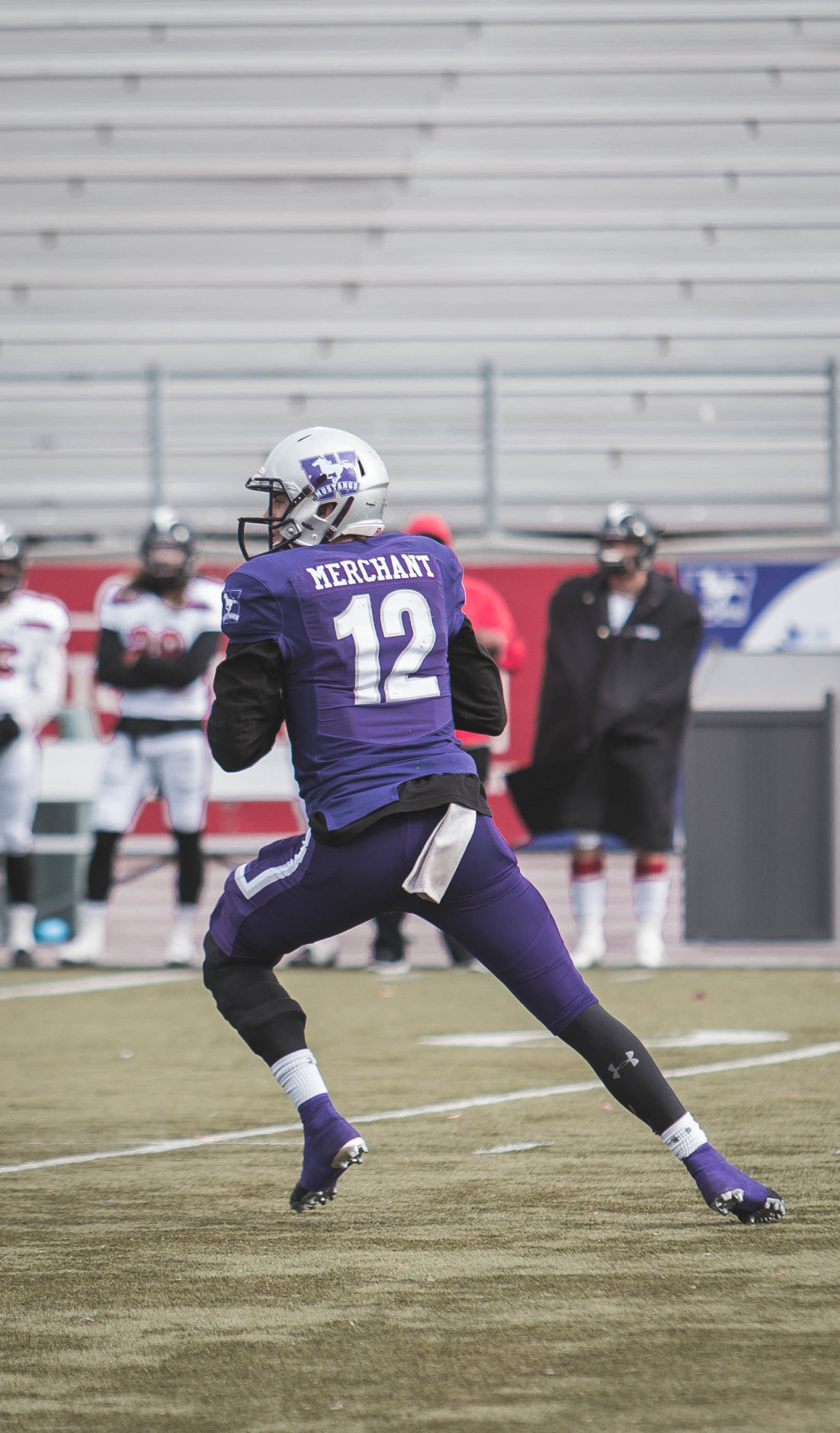 The Mustangs spent the 2019 season playing with house money.

And on Saturday afternoon, Western University had to pay back some of the luck they fed off of all season. But, win or lose, this era of Mustangs football will leave a lasting legacy on the university.

By the start of next season, just eight members of the 52 player roster from the 2017 Vanier Cup victory are expected to return. The number jumps up to 16 for the 2018 team.

Of the eight survivors from 2017, just Bleska Kambamba is listed in the box score of the victory in Hamilton. Jacob Andrews, Deionte Knight, Zack Fry and Daniel Valente Jr. join Kambamba as five of the 16 players listed in the the 2018 loss.

Of course, some could decide to return for their final year of eligibility — bumping up the percentage of Vanier Cup experience. But, as it stands, the group that delivered two Vanier Cup appearances is all but gone.

And that's what made Saturday's loss in the Yates Cup that much more painful.

For the first time in three years, the Mustangs were forced to watch an opposing team celebrate on their field. As the McMaster Marauders accepted their trophy just off the far-side end zone, Western players made the slow, long march back to their locker-room. There was a sense around the team that it shouldn’t have ended this way.

The 2017 and 2018 iterations of the Mustangs had a clear identity: they were going to dominate on defence and run the ball down your throat. It was an old school mentality and it worked — exceptionally well.

But this year, the team was never able to cement that identity. In certain moments, they would throw the workload on Trey Humes and run the ball into the ground. At other times, quarterback Chris Merchant had to air out the ball and rely on the passing attack. They were versatile, but unpredictable.

On the defensive side of the ball, the team was oft-injured and consistently inconsistent. The team would show flashes of brilliance, but they weren’t as rock-solid as last year.

To be fair, that would have been nearly impossible.

Aside from losing many key players on the defensive side of the ball, the 2018 Mustangs squad set a defensive standard few could have repeated. The unit allowed 89 points. This year, the depleted defensive squad allowed 174. The team went from the best in the league to third — just behind the University of Guelph and the Ontario University Athletics champion, McMaster University.

It was this lack of domination on both sides of the ball that led to weariness across the team entering the playoffs.

Last year, fifth-year running back Alex Taylor waxed poetically about how he despised Guelph ahead of the Yates Cup. Linebacker Fraser Sopik described winning the championship game as “less exciting than some because we have bigger goals." To Sopik and the 2018 Mustangs, the Yates was another game that felt “nice to cross it off.”

This season, the leaders struck a different tune. Head coach Greg Marshall described the season as a rebuilding year. Quarterback Chris Merchant preached patience and respect for their opponents entering the playoffs.

Simply put, this year the Mustangs weren’t the world-beaters they had been in the past — and they knew they couldn’t act like they were.

As the season ended on Saturday, Marshall admitted that the team’s perfect regular season record could have looked very different.

“We were a team this year that was … 8-0, but we could have easily been four and four, or three and five, or five and three,” he said.

In fact, that was truly the strength of this team — they kept finding ways to win. Whether it was a last second fumble from the University of Waterloo’s Dion Pellerin or a stalwart defensive performance against Guelph, the team just didn’t lose.

But on Saturday afternoon, with the Yates Cup glittering in wait in front of the north end zone, that innate ability to win seemed to slip away from the team. All of those remarkable plays that used to hit just weren’t there, leading to their elimination.

“You know what, it was — as I said to the boys — it was one of those days,” explained Marshall after the Yates Cup loss. “We didn't catch any breaks. Getting Chris hurt early too, you know, missing some wide open shots early in the first half, where we could get out to a sizeable lead. We missed those chances and dropped the ball.”

“Sometimes that happens. You prepare and you get your guys ready to go and sometimes you have one of those days, and that wasn't our best day.”

The injury to Merchant clearly took the wind out of the Mustangs sails. The fifth-year signal caller had battled injuries to both his ankle and shoulder throughout the season. Despite those injuries, the quarterback kept running out to lead the offence.

That ability to push through pain always stood out to his teammates. Two weekends ago, Humes called him a “warrior.” Last year, Alex Taylor called him “nails.”

But on Saturday, Marshall had to step in — he couldn’t allow the quarterback to continue, knowing the injury had the potential to get worse.

“[Merchant] wanted to go back in,” said Marshall. “He was ready to go back in in the second half. It was just a decision in consultation with our doctors that was [in the] best interest of his health.”

“Sometimes, you gotta do what’s best for your kids. You know, they're my kids.”

In the moment, Marshall had to set aside the outcome of the game for the health of one of his longest-tenured players. Ultimately, sports is just a game — and the head coach had greater responsibilities than the box score.

“They're keen, they want to play, they want to do all these things,” Marshall continued to elaborate. “You know what, sometimes you have to be, you know … when they sign up, when they come here, you know, their parents trust you with them and you say you're gonna look after them."

While humane, the coach’s decision was difficult: aside from being recently named the most valuable player in the OUA, Merchant was widely recognized as the emotional leader of the team.

Last year, after losing the Vanier Cup, the quarterback stood on the field with tears in his eyes describing how he was happy he’d get the opportunity to put on a Western Mustangs jersey again; that he’d have the opportunity to come back, when so many of his teammates would move on.

That’s what made this weekend so difficult. Watching from the sidelines was not how Merchant’s Western career should have ended. It’s been constantly repeated, and the player would likely never give himself the credit, but few embodied giving everything for the team like the Calgary native did.

Ultimately, though, that was how the quarterback’s Mustangs journey ended. In the second half, he was replaced by backup quarterback Kevin John.

After being relegated to the sidelines for the final 30 minutes of his last game for the Mustangs, Merchant assumed his new role as motivator and consultant. The flipped responsibilities didn’t snuff out Merchant’s greatest asset — the bond between teammates, and the bond within the locker-room.

“Yeah, things didn't go the right way, he kinda did the same thing for me when I came in the game. I definitely think we were a very good support system,” John said about Merchant. “And alongside Connor Wicklum and the other QBs, I think we all did a good job supporting him and supporting each other … so, I think it goes beyond more than football.”

Camaraderie was on full display two weeks ago before a playoff semi-final game against Waterloo. Before kickoff, 25 Mustangs players were honoured in a senior day celebration.

Thank You To Our Mustangs Football Seniors!🏈 The Playoff Semi-Final Game Starts at 1pm, today at TD Stadium, where the Mustangs take on the Waterloo Warriors. #WesternMustangs pic.twitter.com/5TgqRzeANX

Humes, who was one of the large group of impending graduates, spoke after the game about how, even after five years, it felt like they were just getting started.

“Yeah, still feels kinda surreal, to be honest. Kinda still feel like a rookie, or I'm in my second year type of thing,” said Humes two weeks ago. “It really goes by faster than you think. But it's just good to see those guys that I came in with. You know, we were on scout team together, you know, we weren't getting much plays when we were younger and now we're kinda like the leaders of the team and being honoured at the start of the game. It's kinda come full circle.”

Almost every one of those seniors accumulated two Yates Cups, a Uteck Bowl, a Mitchell Bowl and a Vanier Cup in their tenure with Western. That’s not a bad four years of football.

Focusing on the positives, rather than the negatives, is what John — who counts himself as one of the 25 graduating players — chose to hone in on when he was asked about his future with the team.

“Being at Western was a great five years. It's been a great run,” explained John. “Been a pretty accomplished team, made it to five Yates Cups in my tenure here. So, I think, overall, as a team, we did a great job. From 2015 to 2019, I think, I put in my time here and I did the best that I can. And going forward, I can walk away and not regret anything.”