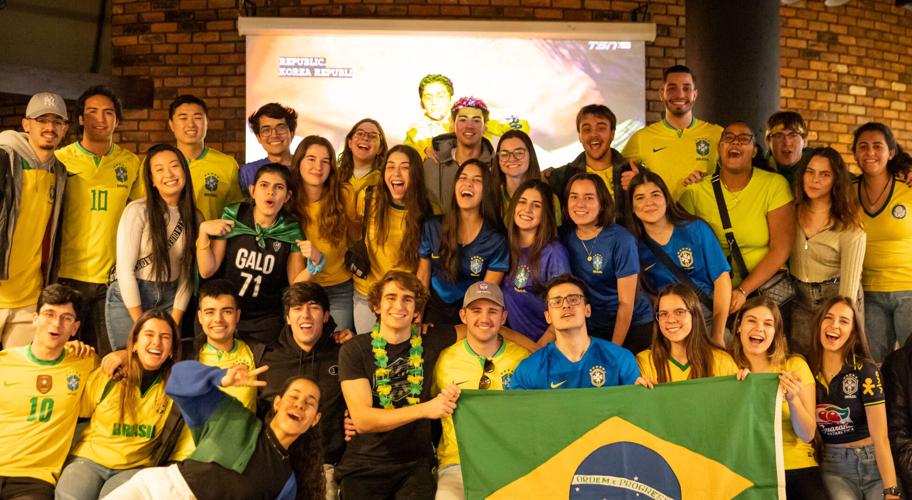 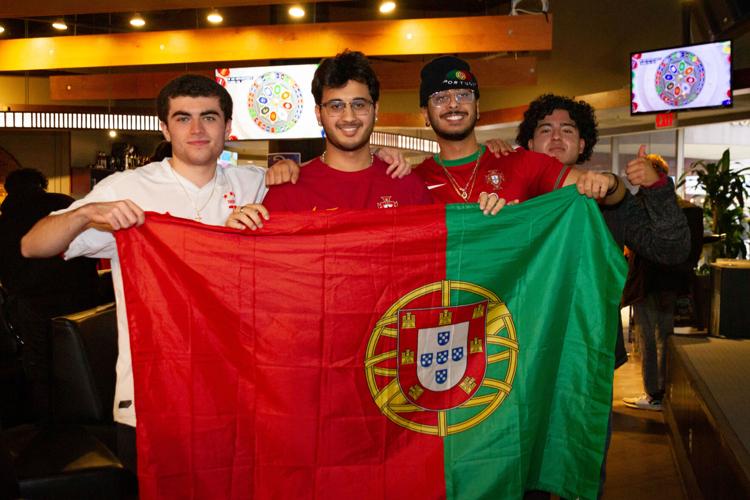 Students celebrate Portugal's victory against Switzerland at The Spoke, Dec. 6, 2022.

As exam season rolls on at Western University, students have gathered across campus to watch the FIFA World Cup. This is the first time the tournament has taken place during the university’s final exam period.

The 22nd FIFA World Cup kicked off on Nov. 20 in Qatar — the first soccer competition to be held in the Middle East — featuring 32 countries. Canada was among the 32 competing nations for the first time since 1986 before the team was unfortunately eliminated by Croatia 4–1 on Nov. 27.

Students sporting their favourite team’s colours have crammed into The Spoke to watch each game telecasted on the eatery’s mainstage.

Alice Costa, a third-year social justice student at King’s University College who came to Canada from Brazil four years ago, enjoyed connecting with other Brazilian students during the soccer games, “especially at this time, when we miss home so much.”

Costa, whose nails were painted blue, green and yellow and carried Brazil’s flag on her back, said she had come to The Spoke to watch all of Brazil’s matches before Croatia eliminated the team from the World Cup on Friday.

“We all get together and sing to let everyone know we’re here, proud and going to win,” she said. “It’s awesome because we respect everyone. Here, it’s so chill. If we win or lose, we’re all together as one.”

“It’s a really nice atmosphere for us Western students to watch the games and meet with other Moroccans,” said El Hajoui.

El Hajoui never realized so many Moroccans attended the university until he started watching the games in the University Community Centre.

@uwogazette Who do YOU have in the World Cup final? ⚽🏆 Check out how the Gazette's World Cup bracket is doing at westerngazette.ca. #worldcup #westernuniversity #westernu ♬ original sound - The Western Gazette

Some students, like second-year BMOS student Nick Hansraj, have watched every single tournament match at The Spoke.

“I love supporting my country with all the people around,” said Hansraj, who is Portuguese. “It’s really nice that the community comes out. I love having my brother and boys beside me, cheering with everybody.”

Hansraj said, at earlier games, students whose teams had won gathered on stage in excitement after the game and cheered together.

The Spoke isn’t the only place streaming the World Cup on campus. Students have also gathered at The Wave, Thames Hall and in first-year residences.

Sophie Seguier, a first year economics student, has been supporting France and catching the games at the Saugeen-Maitland Hall cafeteria.

“At Saugeen, there’s a lot of students from everywhere that come to watch the games,” said Seguier. “I, unfortunately, prioritize the World Cup, but it’s a good break between studying.”

In late November, a fire alarm evacuated the UCC in the middle of Canada’s first World Cup game against Belgium. After they were let back into the building, students eagerly crowded outside The Spoke to ensure they could get back to watching the game.

The tournament entered the semi-finals Tuesday, with Argentina eliminating Croatia 3–0. France and Morocco will kick off on Wednesday at 2 p.m.. Argentina will play the winner of the Wednesday semi-final in the World Cup final on Sunday at 10 a.m..

Adshayah is a News Editor for Vol. 116. Email her at adshayah.sathiaseelan@westerngazette.ca.